What is the Best Caterpillar Management Plan For Your Property?

As many of you have read and witnessed, the caterpillar populations have dwindled; however, there still is a presence as adult moths were sited this past year.  In 2023, we believe our customers’ trees will be sufficiently protected by (1) properly timed insecticide spray during the early emergence of leaves and caterpillars in May.  If you elect not to manage your property with a single insecticide and would prefer to continue doing the two insecticides as we’ve done in the past, we would be happy to provide those services.  In fact, if you felt that your property still experienced heavy defoliation last year and/or you have a low tolerance for caterpillars, the two insecticides sprays could be a good option for your property. 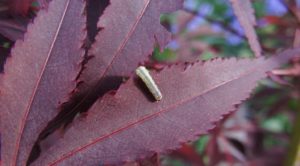 We all know how much of a pain caterpillars can be in our landscape whether they’re defoliating our trees, falling on our cars, or dropping their excrement on our patios, caterpillars can be a nuisance on Cape Cod. Timing is everything with these critters and there is a very small window of time in the spring to target them before the damage is done.  We recommend a properly timed application of insecticide to be applied to the canopy of the tree once the leaves begin to emerge.  Deciduous trees including oaks, maples, fruit trees, as well as shrubs such as roses, lilacs, and blueberry bushes are their main targets.  Winter Moth Caterpillars can wreak havoc on your trees if not properly treated.  Even as few as four years of repeated defoliation could lead to the mortality of your tree.  There is another caterpillar present in the landscape around the same time called a cankerworm.  It looks very similar to a winter moth caterpillar but moves much faster.  Our treatment should take care of these foliar feeding critters as well. 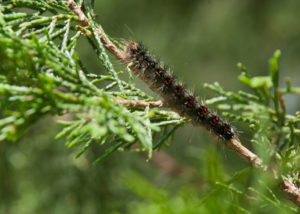 Gypsy Moth Caterpillars were a large issue in the 80’s and have recently returned to certain areas of the Cape.  There’s actually a naturally occurring fungus called Entomophaga that normally combats these caterpillars, but the dry conditions we’ve had for the last couple of years have not allowed this fungus to grow.  Without this fungus, the gypsy moth caterpillars can thrive.  They feed on similar trees as the Winter Moth Caterpillars, as well as pine trees.  They are a force to be reckoned with as they can easily defoliate a single tree in under 24 hours.  The timing of this caterpillar spray is also important and the window of opportunity is just after the Winter Moth Caterpillar spray.  Even if you protect your property from Winter Moth Caterpillars, the Gypsy Moth Caterpillars could still defoliate your trees if they emerge in your area.  Unfortunately, it’s difficult to determine exactly where they will be an issue but research has shown that the populations have been expanding more and more across Upper Cape over the last couple of years.